I love God, because I love His creation 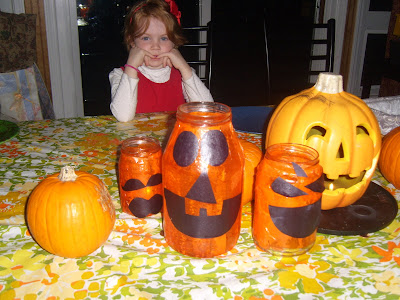 Outside My Window: I love fall! I found myself humming "It's the MOST wonderful time of the year!" ( Yes, I know it is a Christmas song) more than once after a walk or a jaunt outside. Out here in our rural area the day can sometimes "glow" with the sun coming through the brightly colored leaves. I'm not generally a person who enjoys hot weather, so I welcome the cooler temperatures. Cider, and apples and the scent of burning leaves, all is heaven to me. Now, we have sort of left the "glory" days of fall and all the leaves have blown off the trees and the days take on more grayness than sun. Still, it is my favorite season and I revel in it. Above are the "decoupage" pumpkin candle holders we made. I have discovered "Modge Podge". Pretty fun stuff! 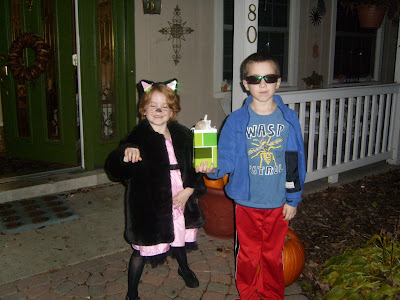 Well, our Halloween was a muted affair. We sort of scrambled to come up with costumes (Gabriella, by and large, came up with that one herself!) and since trick or treating doesn't happen on our country road ( too far to walk between houses :) we hid some candy bags in the backyard and the kids seemed happy with that. On a whim, we decided to drive to a neighborhood down the road, but even there, only 3 houses were giving out treats. For those to whom this holiday mattered, I think it was fun enough. :) 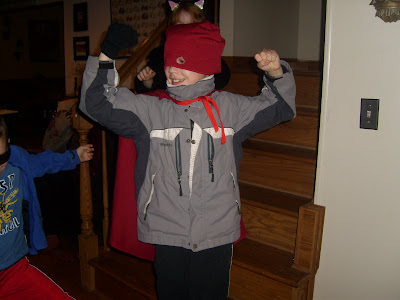 Jed is enamored of "Stupendous Man" from Calvin and Hobbes. 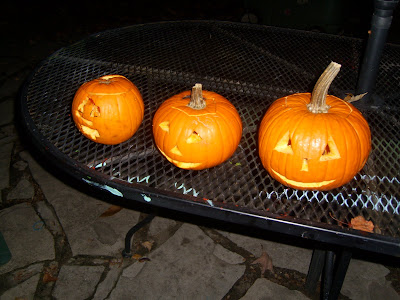 These pumpkins we actually got from the pumpkin farm, but we did get 6 or 7 small pumpkins from our own crop this year. 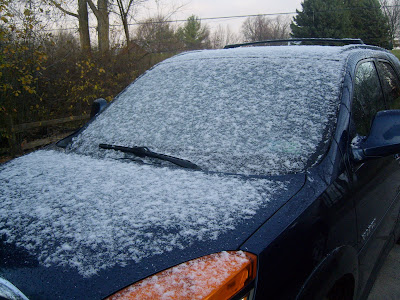 Of course, even during fall, the inevitable happens here in MI. 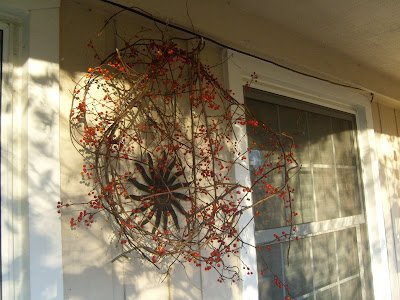 You know, if I was out walking and saw a diamond ring on one of my neighbor's drive, I wouldn't be the least tempted to pick it up and pocket it ( unless it was to give it back to them) as I am if I see bittersweet on their property. Seeing that makes me start coming up with all kinds of covert operations to go and snip some for myself (they'd never miss it, right? ;) Thankfully, I was saved from my shameful thoughts by finding some in an open field, although by the time I discovered it, most of the pretty orange leaves had blown off by a couple windy days. Still, I love it and all the dried plant life I find this time of year. I adore flowers, but I think I love dried more...mostly because it can last so long. (I may add that if you find bittersweet at a Farm Market or such like , it is darn expensive...thus the excitement over finding it for...free :) 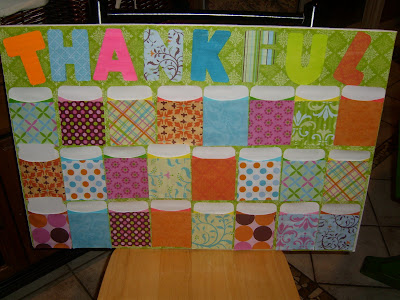 A little Thanksgiving project. The original idea ( have to find that link) that a friend shared is much cuter and is done with more fallish colors. I was trying to use "what I have in my hand" and came up with this. You put little unruled index cards in the envelopes with things you are thankful for throughout the month and year and I plan to read them at T'giving dinner. 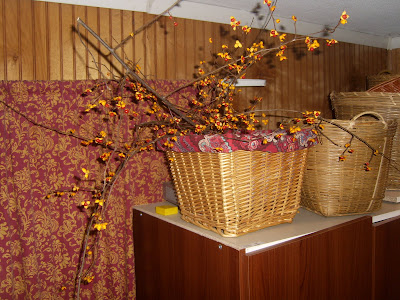 Here is what bittersweet is REALLY supposed to look like....this little bit I actually found down by our marsh. Funny, what a small amount there was when in other places there are trees just loaded with it. 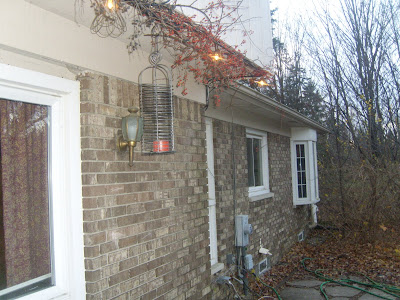 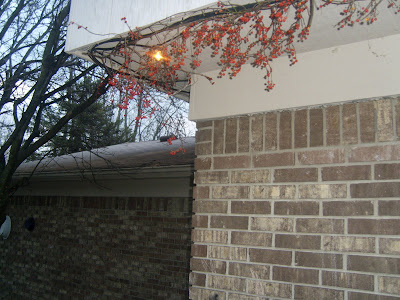 For some reason, this house is plagued with a glut of cables on the outside ( do cable-guys have no aesthetic appreciation?) I don't know if it is because we are out in the sticks or these particular cables were done long ago, but they really look ridiculous. The worst offenders are on the overhang to the door to the patio. I even found some cute lights to hang there, but I think it made it look worse with the electrical cord from them added to the mix. My magnum opus this fall was to hang some...what else....bittersweet vines and another vine...maybe wild grapes? (don't quote me) intermixed with the wires. Well, I have no idea how well this solution will hold up...if they will start looking tired soon, or if the snow and ice will bring them down eventually, but for the time being, I like.
I am thinking: "[Americans] are extremely eager in the pursuit of immediate material pleasures and are always discontended with the position that they occupy....They think about nothing but ways of changing their lot and bettering it. For people in this frame of mind every new way of getting wealth more quickly, every machine which lessens work, every means of diminishing the cost of production, evey invention which makes pleasures easier or greater, seems the most magnificent accomplishment of the human mind...One usually finds that the love of money is either the chief or a secondary motive at the bottom of everything Americans do." Alexis de Tocqueville, 19th Century :) 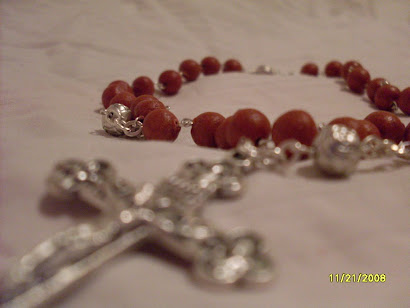